• Strategic investment on the 20th anniversary of the printing plant 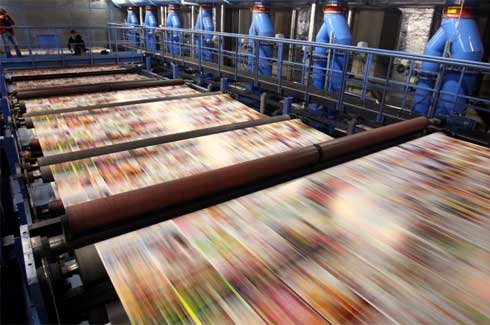 At an inauguration ceremony attended by customers and employees, Stausberg symbolically powered up the machines. In his speech, he commented: “Today marks an important turn in the road for Prinovis: the official inauguration of our two new offset presses. They serve as a strategically important complement to our core business of gravure printing.” Stausberg added that many customers’ projects are becoming more diverse in terms of print runs and formats, “and Prinovis can now meet these additional requirements even better.”

“A signal of stability”

Stausberg sees the multi-million investment in the Dresden site on the twentieth anniversary of its printing plant as “a technological enhancement of our operation and a signal of stability, because by installing the new machines we have not only secured jobs but also created new ones.” In addition to existing staff who have been trained on the new machines, the company has created eleven new jobs.

Hauke Knafla, Head of Production and Technology at Prinovis Dresden, who is responsible for the assembly of the offset printers, added: “We are proud that Prinovis’ first hybrid location featuring both gravure and offset production is being created in Dresden. This broadens our range for customers. We’re happy that our production can now go into full operation – we are highly motivated and will deliver Prinovis’ hallmark quality in offset as elsewhere.”

By starting up the hybrid location, Prinovis now offers customers new products that combine the two printing processes: for instance, the cover of a magazine can continue to be produced in gravure, while a regional supplement to the same magazine could be produced on the offset presses. Or the cover could be gravureprinted with UV coating, while the content is produced in offset. Customers can now order magazines that use different types of paper (matte offset printing paper and shiny gravure paper). Add to that new options in finishing and logistics.

While testing the offset machines in the past few weeks, Prinovis Dresden produced a prospectus for the Klingel mail-order company with a print run of 509,000 copies – as well as a brochure for the “Prinovis Media Day” customer conference, also held in Dresden today. The booklet combines offset content with a gravure cover for the first time.

Prinovis Dresden employs more than 400 staff and produces print jobs for wellknown publishers and retailers. The company can print up to 165,000 tons of paper a year, which corresponds to a capacity of more than 100 million magazine and catalog pages per day.